skip to main | skip to sidebar

Dawn Redwoods: A symbol of resilience for 2021 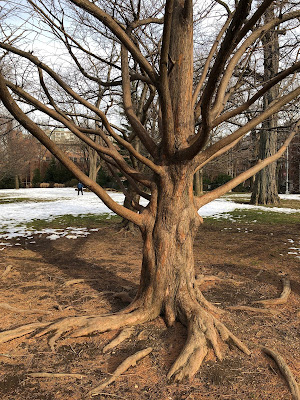 For the 2020 holidays, posting about these intriguing trees located in the top lawn of Isham Park, in part because park visitors often ask about them.

They are supposed to grow in low-lying areas near water, so their location on this highpoint is thought to be unusual, even though a couple of very large examples also stand in front of the Glyndor Gallery at Wave Hill, in another dry, elevated location.

They are deciduous, i.e., they loose their leaves in the fall when they also produce tiny cones. Dawn Redwoods were thought to be extinct until the middle of the 20th century when a group of them was rediscovered and an effort was made to distribute them widely.

Posted by Volunteers for Isham Park at 4:36 PM No comments: 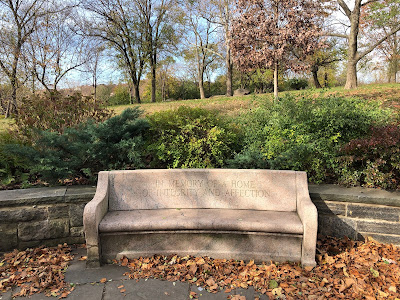 Just to share a fall image of the memorial terrace in Isham Park.

During this Pandemic year, Isham Park has provided a respite for all. Its quiet nature has come to the aid of families and individuals, young and old alike.

The park was given to NYC in 1912 - actually dedicated in September of that year. So it existed during the 1918 flu epidemic when it must have also served as a place of quiet recreation.

Posted by Volunteers for Isham Park at 2:07 PM No comments:

Last Wednesday, July 15, 2020, NYC Parks made their weekly Wednesday Walk Facebook Live Video in Isham Park! Walter Markham, the NYC Parks Gardener for Isham, is interviewed by video producer Adrian Sas about the great gardens he has designed for the park over the past five years:

While the video is very spontaneous, it is also very effective communicating the beautiful design of the park which was created in the late 1930s by landscape architects Gilmore Clarke and Michael Rapuano under then NYC Parks Commissioner, Robert Moses.

Isham Park is graced by beautiful WPA stonework, in the form of simple walls and steps that frame and enhance the gardens discussed, which are also juxtaposed to open areas of lawn with stately, mature trees.

The triangle described by Walter is a signature feature of the paths of both Isham and its younger and much larger neighbor, Inwood Hill Park. Both parks were designed simultaneously and share triangular intersections as a feature. It is fun to locate the many triangulations during a walk on Inwood Hill. Some paths in the lower portion of Inwood Hill Park also end in semicircular openings that frame views, especially to the north and west of the Hudson River and the New Jersey Palisades.

In Isham Park, there are two circular terraces: one on the park's eastern slope above Broadway serves as a memorial to the Isham family and another at the top of the park that must have been intended to provide views in all directions, a major feature of the park when it was given in 1911.


Posted by Volunteers for Isham Park at 1:04 PM No comments: 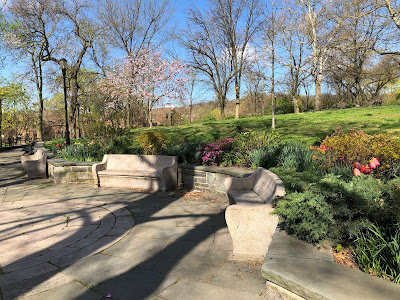 Today marks 50 years since the first Earth Day was celebrated in 1970.

Isham Park looks amazing, with the exception of some tree damage caused by yesterday's storm.

The Northern Manhattan NYC Parks Department staff mowed all of the lawns in Isham Park, a perfect job, yesterday morning before the weather changed at around noon.

Many new and old gardens are in full bloom throughout the park.

With the Pandemic playing out, no group celebrations are possible. But the park can be used as intended for quiet pedestrian recreation.

Enjoy and reflect on the perfection of our planet!

Posted by Volunteers for Isham Park at 5:09 AM No comments:

In late 2010, Volunteers for Isham Park successfully submitted Inwood to the Historic Districts Council for its new "Six to Celebrate" program.

After the public announcement of the award in early 2011, Pratt Historic Preservation Program graduate students offered their assistance and a basic architectural survey of the neighborhood was completed.

One benefit of the new program was a Walking Tour Guide Book for Inwood that was published in the summer of 2012. Originally printed in English, it was translated into Spanish after Diego Robayo, the Historic Districts Council's Public Relations Specialist for Hispanic Communities, was hired in 2017.

Now you can also read them on-line via these links to pdf copies:


Posted by Volunteers for Isham Park at 12:04 PM No comments:


Posted by Volunteers for Isham Park at 12:27 PM No comments:

First VIP post in 2019. Spring has been very beautiful so far, due in no small part to the abundance of rain in our area over the past year.

It has been five years since the completion of the water service restoration for Isham Park. Watering has been immensely important for the establishment and maintenance of plantings, especially during periods of drought we commonly experience.

To water! one of the most important elements for our survival and that of our planet.

Posted by Volunteers for Isham Park at 11:10 AM No comments: